My daughter, Sophia, was a “good” baby. I didn’t think so at the time. I remember feeling tired and overwhelmed. She struggled to latch on and breastfeeding was a constant challenge. My hormones were crazy and I felt the “baby blues” pretty badly for the first two or three weeks of her life. I remember wondering how people survive those first few months when it feels like nothing will ever be “normal” again. And then, of course, it is. Five years later, when I found out I was going to do it all again, I felt prepared. I knew it was hard, but it was doable. I had survived life with a newborn once, I could do it again.

I tried to sleep as much as I could leading up to D-Day. Sure, I was uncomfortable, but I understood that this was as good as it was going to get for a while. I took baths, went to bed early, and spent as much time with Sophia as possible, cherishing our last few weeks together without her little brother attached to my hip (or boob, because let’s face it, breastfeeding is life for the first few months.)

I had a perfect delivery. I labored on the birthing ball, in the shower, on the bed. I had a doctor who supported my birth plan and was very patient. There were no complications. It was the polar opposite of the chaotic scene that had taken place in the very same hospital six year before when my daughter was born – but that’s a story for another day.

Right away, Reece was very alert. He watched everyone very intently. He didn’t sleep all day at the hospital like “most” babies. People even commented on how awake and alert he was. He was a champ when it came to breastfeeding. It happened so naturally and organically without any struggle. What a good baby. 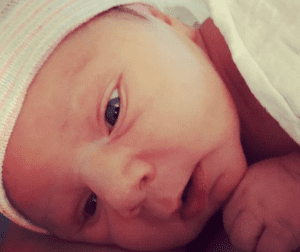 Reece at 2 hours old – taking in the world.

Those first few nights in the hospital were tough. But. I could tell that once we got home and started our routine everything would fall into place.

Our first night home was OK… Exhausting, but OK. The second night was a little harder. The third night was… impossible. By then the exhaustion had reached a critical level. Reece didn’t sleep unless he was held. No, not just held, held in my arms, swaddled, while I bounced on a medicine ball and shushed loudly in his ear. If he wasn’t breastfeeding or being bounced on that ball, he was crying, screaming.

Certain he was in some kind of pain, we mentioned it to the pediatrician. Reflux perhaps? We started meds – they didn’t help. Colic then? You just have to wait that out. Well we couldn’t. By two months, I’d had it. We tried gripe water, probiotics, gas drops… I changed my diet completely, eliminating dairy, soy, and grains. It helped a little. Now, Reece only cried from about 4:30 to 12:30 or 1. It was like clockwork.

So I started to head it off. At 4:00, I swaddled him and took my place on the ball. Bouncing and shushing loudly occurred until about 6:30 or so. By then my butt was completely asleep and I took him upstairs to his room to breastfeed him and shush loudly in his ear while I rocked him in his rocking chair. Breastfeed, rock, shush, repeat… Around 12:30 or so he would finally get exhausted and fall asleep. By 2:00 he was in deep enough sleep that I could dream feed him and put him down his bed. He might sleep for two hours before I had to get up and do it all again, but I needed those two hours. I was afraid I would fall asleep in the rocking chair and drop him.

I remember talking to my friends or hearing about family members’ babies who were sleeping through the night. They didn’t cry for eight hours every day. They didn’t require a six hour bedtime routine. What was I doing wrong? 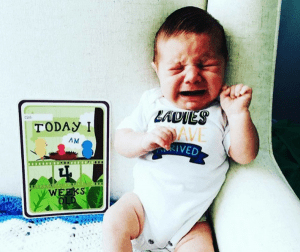 Reece’s face when he wasn’t being held/shushed/bounced/fed.

Reece is what our pediatrician called a “high needs baby” and boy, was he ever. Looking back, I really can’t understand how we survived, but we did. For six, long months, this was our routine. And then one day, it just stopped. It was like a switch had been flipped. Then, life got a whole lot easier.

If you’re in the throes of this, you are not alone! You’re not doing anything wrong, and it really will not last forever. In the meantime, here are some things that helped us survive life with a high needs baby. 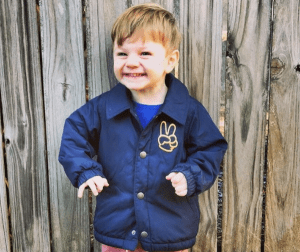 Today Reece is a happy, healthy, and extremely intelligent two year old who speaks in full sentences and communicates well. He is… spirited… to say the least. He is strong-willed and a perfectionist. Still, sometimes, certain personality traits come out that remind me of our first six months together. It was all worth it.

If you have or have had a high needs baby, please share what has worked for you in the comments! There might be a mama out there who needs it!