“Some kids are just D students,” I was told. My ears started ringing; I could feel my chest pounding as I stood in the hallway of my son’s school. I could not believe what his first grade teacher was telling me.

She continued saying, “Maybe you were an overachiever in school, but that doesn’t mean he is.” My heart sank as so many emotions were flooding my body. I was angry, sad and desperate all at the same time.

It is a mother’s job to instill confidence in her children; to guide them and create well-adjusted adults. But my first grader had lost all confidence and any desire for school.

I would pick him up in the afternoon and he would sit in the back of the car… silent, all the way home. He was terrorized each Thursday night as we studied his spelling words because he knew… no matter how long and hard he studied, there was no way he was going to pass that test. Just waking up and getting ready for school became dreadful for him.

My son has dyslexia.

I was suspicious early-on, being the daughter of a severely dyslexic mother; I knew the signs.  I asked for guidance when he was in pre-school, but they kept passing the buck saying, “it’s too early to tell; wait until he’s seven.”

Each year, I would inform the new teacher of my concern… and each year I was given different mis-information.

I was just another “nut mother” in their eyes.

His kindergarten teacher, Mrs. Schorr, was the only one who took the time to notice. She showed me a list of the alphabet written by each student in class.

“Most kids…” she said,” will switch around a few letters at this age, but look at Cairo’s paper.”

It was confirmation of what I already knew; there had to be fifteen or more letters reversed, upside down or completely unrecognizable.

I was grateful that someone finally understood.

By the time he was in first grade; the curriculum became more intensive, his dyslexia could no longer be ignored.  I knew how smart he was, but his grades were simply not matching up to the effort he made. It was obvious to me what the problem was, but shockingly, not to his teacher.

She would write passive aggressive notes on his tests like “Uhhh ohhh Cairo, you have had these words for three weeks, did you study at all?”  That one test, in-particular, was sent home with a failing grade of twenty percent; her humiliating notes were always written in very RED pen.

Once she even made over seventy-five red marks on a one page article he wrote about Martin Luther King Jr, he was in first grade… mind you.

I took all these notes from the teacher to the head of school and do you know what I was told?

“He will grow out of it, have him study harder.”

“STUDY HARDER?”  He was already studying harder than anyone I knew.

He would say his spelling words over and over until he KNEW they were all correct. We would even repeat them out-loud on the car-ride to school.

This kid wanted so badly to get a good grade, but the problem was getting the words from his head… onto the paper correctly.

The next year, his second grade teacher understood his issues; her solution was to give him the test on paper first and the ones he got wrong he could spell out-loud for “partial” credit.

I thank her for the effort, but the damage had already been done by his tyrannical first grade teacher; his confidence had been destroyed and his spirit was fading fast.

You see, I knew about these problems because my mother is a seventy-three year old dyslexic. She did not out-grow dyslexia like so many people say, they just learn how to deal with it.

My mothers inner voice tells her she is “stupid and dumb” on a daily basis. She can’t write down a phone number or and address without second guessing herself; she checks her work at least ten times and even then she is unsure if she wrote it correctly. 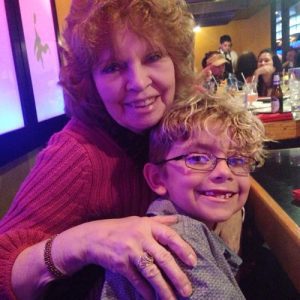 I didn’t want this same legacy for my son, but I could see the patterns of self-doubt creeping in.

If HIS homework was taking ME two hours, EACH NIGHT, what would high school be like?  (YIKES) I was panicking if he would ever go to college or not.

The mother of a dyslexic can not just sit her kid at the kitchen table and say “OK, it’s homework time,” then go about her daily business.

NO WAY, it’s not possible. Homework was pure torture… for both of us.

Desperate, I began searching for help. I discovered a local dyslexia screener and made an appointment. This wonderful woman changed our lives by confirming what I had known all along.

“He’s dyslexic for sure,” she said, “and not just a little… it’s pretty severe.”

This woman was an “Orton-Barton” tutor for dyslexics who told me to contact All Children’s Hospital.

I set up an evaluation immediately.

The test at All Children’s was supposed to be a three hour evaluation, but the woman told me that she could not reach “his ceiling,” meaning… my kid was FAR from stupid, which I already knew.

His tests came back showing him to be “extremely intelligent with definite signs of dyslexia”.  This diagnosis helped me get my son the accommodations he desperately needed, and prove it once and for all.

What I did next may not be possible for many mothers going through a similar thing, but I took my son out of a traditional-learning type of school and enrolled him in a Montessori school.

If you don’t know what Montessori schools are, I highly recommend learning about them… especially for dyslexic children. This is by no means an advertisement for a Montessori education, I am only the proud mother of a child who is finally THRIVING in school and I want to scream it from the rooftops.

In Montessori they learn math (even algebra) from an early age using manipulatives; everything is hands-on. My son receives a “Barton system” tutor directly from school and he has only one test a year with little to no homework. The classroom is not even set up like a “traditional” class; it’s fun and interactive.

It is worth every penny for this type of education because he comes home laughing and smiling now. My dyslexic son went from hating school and feeling stupid to being tested in second grade on a fifth grade reading level, something I NEVER thought possible.

I understand that a Montessori education is not a possibility for some families, but I do recommend looking into some form of specialized dyslexic tutoring such as the Barton System, because they are VERY different than a “normal” tutor.

A dyslexic tutor utilizes the Barton system or similar. They try to create new connections between the right and left side of the brain by using all the senses.

They say a vowel, for instance, while simultaneously tapping a block with that vowel written on it. There are multi-sensory games, and even moving pieces to stimulate the brain in ways that a dyslexic needs. They don’t make them memorize their multiplication tables like a “normal” tutor.

It’s not about that.

Studies show that one in five kids have some form of dyslexia. That’s twenty percent, so I KNOW I am not alone in the struggle to diagnose and receive the accommodations they deserve.

… And sadly, many good teachers were not taught the signs to look for or how to psychologically deal with a young ego that struggles so hard. If you have twenty kids in your class, four of them may be dyslexic, they are not “just D students.”

I had a teacher tell me they spent only one day in college on the signs of dyslexia and she was never taught what it really does to a person.

They say the brain of a dyslexic child is actually larger on its creative side. The “myth” is that dyslexics see things backwards, but that’s not really the whole story…  My mother for instance has to place her thumb at the end of a sentence because she says “the words melt off the page.”

My son confidently tells me “I write perfect now,” because he doesn’t think he needs his tutor anymore. But, when I read his schoolwork I am sad to say that it is still very obvious.  He just “sees” it as correct…

Dyslexics have issues with loud noises and playing team sports; preferring solitary things instead. My son is into surfing, skateboarding and Tae Kwon Do, but you can not get him to join a team if you paid him a million dollars.

This disability is FAR MORE than just reversing letters as so many people seem to think. 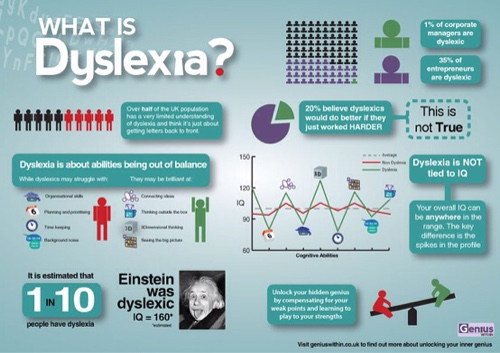 Before reaching school age you may notice they begin speaking later than other kids, or nursery rhymes are particularly difficult for them.

My son had zero interest in rhymes.

As he has grown, I notice things like… he is not very good at describing a story. I find myself constantly asking him to “give me more detail, I don’t understand,” or “put the window up Mommy,” usually means “put the window down.”

He is a left handed dyslexic, these two combined nuances have proven to be nearly impossible for me to teach him how.

In a perfect world, it would be beneficial for our overwhelmed educators to have much more training in this area… being that it is so common, don’t you agree?  Until that time, we as parents have to do all that we can do for our children.

If you suspect a learning disability such as dyslexia take action. Do not let your child struggle when they don’t need to.

Listen to your gut!  “Some kids are just D students” was the phrase that sent me on a rampage, but now I use D for Dyslexia…

I tell my son that his dyslexia is his “super power” by describing all the brilliant and creative people who have had dyslexia such as Walt Disney, Thomas Edison and Albert Einstein.

The difference between failure as a dyslexic and incredible success is what we as parents and teachers do NOW to shape the way they see themselves. EARLY INTERVENTION MATTERS.

I look at my mother and think to myself that I will never let my son live his life second guessing himself or have his inner dialogue constantly call him stupid.

My kid is strong, smart, funny… and finally CONFIDENT.  There are no limits to what he can do.

MUST READ: The Problem with Schools: http://blog.dyslexicadvantage.org/2015/02/06/the-problem-with-schools

How to Get an IEP: http://dyslexiahelp.umich.edu/parents/living-with-dyslexia

It’s Not an Effort Problem: https://www.noodle.com/articles/dyslexia-is-not-an-effort-problem

Schools in the Tampa area: