Being a mom with a chronic illness is difficult. Despite my best efforts, my asthma has not been under control lately. Ever since I became pregnant with my second son a little over two years ago, I have had regular asthma flares requiring use of my rescue inhaler. This has become my new normal and I hate it.

I was diagnosed with asthma at age 4. Still now, my asthma is triggered primarily when I am sick with any kind of respiratory infection or during allergy season. It is considered atypical because I don’t wheeze when I’m having an attack; I literally cannot stop coughing for hours instead. 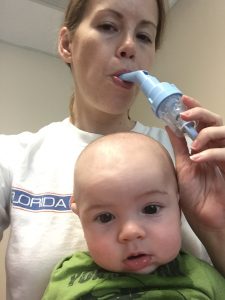 As a child, I remember receiving weekly allergy shots and knowing my doctor’s office staff better than most kids know non-familial adults. I had an asthma and allergy specialist physician who I routinely saw, and still I was sick all the time. We didn’t have an at-home nebulizer so if my rescue inhaler wasn’t cutting it (and in the middle of the night, it rarely did) my mom drove us to the hospital to help me breathe. In case you didn’t know, a sick kid who is having problems breathing gets to skip the line in the emergency room every single time. As a mom, I can’t imagine what went through my mom’s head each time we had to rush off to the hospital at 2am. She must have been exhausted, panicked, and scared, but she never showed it. She has fierce mom skills.

As an adult, I can count on one hand the number of times I’ve had to head to the emergency room for a nebulizer treatment. This happened mostly in college, including when I walked to Shands from my dorm much to everyone’s dismay. My Albuterol inhaler has been enough to kick-start my lungs functioning normally when I’ve been sick, and it’s been rare for me to use it, even then.

Did you know that pregnancy can cause asthma to worsen, improve, or stay the same? According to the Mayo Clinic, “asthma severity during pregnancy is related to asthma severity prior to pregnancy.” During my first pregnancy, I had one major illness and flare up, but other than that I felt great. With my second one, however, I seemed to get a cold every month requiring use of my inhaler. Even though medications taken during pregnancy can pass to the baby, it was safer for me to use my inhaler and breathe than to experience asthmatic symptoms where the baby may not be receiving enough oxygen. My second baby was born without complication or health issues.

Since his birth, I’ve been in my general practitioner’s office practically every month with either a cold or strictly asthmatic symptoms. Having asthma flares without an accompanying illness is a new development for me. My doctor prescribed me a steroid inhaler to use twice a day, and it was helping until Hurricane Irma hit.

It was a perfect storm of stress. Trying to prepare for the hurricane and riding it out as well as debris from trees and mold. All of this combined with this fall’s allergy season caused my worst asthma flare to date. I visited the doctor three times in two weeks. I ended up with asthmatic bronchitis, and took 6 medicines to shock my system into normalcy. Unfortunately, I even have my very own nebulizer for the first time in my life. I wish I didn’t.

It has been incredibly difficult to get better while I have two energetic and loving young boys to take care of. Luckily, I have a support team of family and friends who stepped up to help. This allowed me to do as little as possible for others and focus on myself (i.e. lay on the couch and do nothing in my drug-induced haze). My inlaws made dinners and watched the boys. I took advantage of my YMCA’s Mom’s Morning Out childcare program. My church family sat with my four-year-old so he could worship at church and his pastor daddy could work. “It takes a village” has been my parenting lifesaver.

I’m feeling great this week. I am back running and climbing with the boys at the park and working out at the gym. But in the back of my mind, I worry. Not being able to breathe is scary. Living with a chronic illness like asthma is scary. But, it’s part of me. I don’t like my kids to see me panicking and struggling to breathe because it scares them. I feel frustrated that being on a daily steroid inhaler is my new normal for the indefinite future.

As a mom, I worry my sons will inherit the disease. I’m always on the lookout for asthmatic symptoms when they’re sick. So far this concern is unfounded, although my youngest had a chronic cough for several months during his first year. I’m not in control over whether he has it or if mine gets worse. I just have to hope it stays under control. I hope.