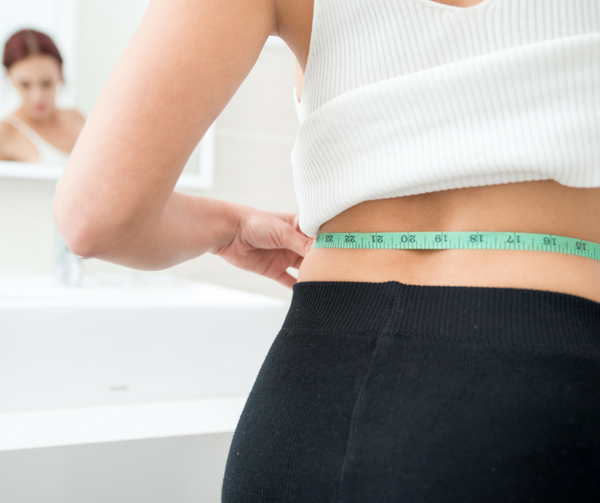 “You do. A lot. Maybe you don’t realize it, but every time we have dinner and you refuse something you always say something like, ‘Mommy can’t have that because it will make her fat’ or something like that. You talk about it a lot. You need to be careful.”

And that was that. The conversation was over. I went to my bedroom, shut the door, and starting thinking. Did I really do that?

I did. Almost every single dinner. Why couldn’t I just say “no thank you?” Why did I have to say anything about getting fat?

My husband was right, I did it all the time. And now my pre-teen daughter felt like to be beautiful, she needed her bones to stick out.

Part of me was horrified, part of me was relieved. I know that sounds insane but hear me out. I was relieved because it made me aware of what was happening right under my nose. My daughter eats – a lot. She doesn’t starve herself or feel self-conscious about what she eats. She has never considered a “diet,” and she is fortunately young that this very scary way of thinking could be stopped in its tracks.

So the next morning we sat down and had a talk. We talked about our perceptions of beauty, of what really makes someone beautiful. Surprisingly, she conceded that other people did not need their bones to stick out in order to be beautiful. But that she thought that SHE looked more beautiful when she could see her bones protruding. I admitted that sometimes even grown ups struggle with how they see themselves, how they talk to themselves, and how they treat their own bodies. I tried my best to explain away my negative self-talk, that really the most important thing is to be healthy and strong (this was a reminder that I clearly needed as well.)

And then I laid it all on the table. I told her that this mentality was not only dangerous, but potentially deadly. Then I explained to her how people that I knew who had become victims of that same mentality – one of whom suffered kidney failure and nearly died. I apologized for setting a bad example, and together, we discussed that instead of talking about being fat or thin, it would be better for me to focus on being healthy and strong.

I am still haunted by that day. Every once in a while I go back and beat myself up about it. Other times I go back and try to rationalize it (“It isn’t all my fault, I never talked about my bones protruding”) but I would be lying if I said I hadn’t (in the past) wished to see my collar bones a little more, like some of my friends or some of the women I see on television. I was so self-absorbed that I didn’t realize I had a mini-version of me constantly watching, looking up to me, trying to be like me, and all the while I was paving the way to a poor self-image and incredibly dangerous behaviors.

Since then, I have been hyper-aware of what I say and do when it comes to my body as well as the images that my daughter is exposed to. Unfortunately, the world we live in makes it impossible to eliminate every influence that might negatively affect her body image, but I can 100% control the influences in my home, and that had to start with me.