When my son, Ben, turned eight, we went on a series of activities that we called birthday missions. That particular day, we got doughnuts from Krispy Kreme, bought his scouting uniform as he was becoming a Cub Scout, and went to see a movie. What I didn’t realize at the time is that I was starting a tradition. Come early November, his sister started asking what her birthday missions were going to be.

Over the years, missions have been any number of things. One constant is the doughnut mission. There have to be doughnuts on birthday mornings. One year, my daughter Katie’s birthday was on a Sunday and she asked to have one of her missions be to bring doughnuts to her entire Sunday school class, so we made that happen. 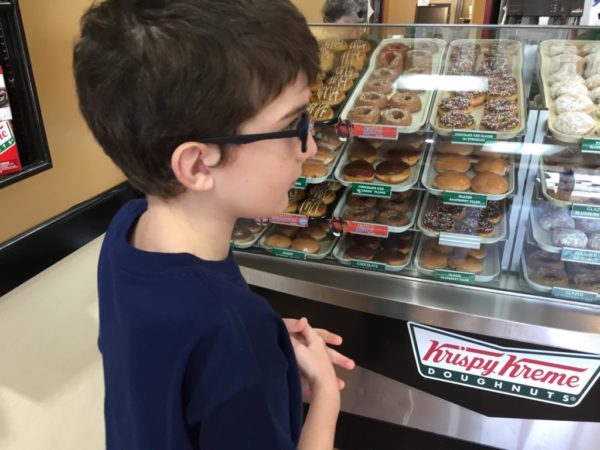 My son’s eleventh birthday was a couple of weeks ago. He had some really specific ideas about what he wanted to do. He planned part of it ahead of time with his fabulous choreographer and some of it came as a total surprise to him.

We started his day going for doughnuts. He selected all of his favorites. After doughnuts we let him open his presents. At noon, he met with his choreographer at Judy’s Dance Academy for solo practice. After his practice, we went to Publix and picked up his favorite lunch. In the afternoon, he received more gifts and then had a serious discussion with his dad about a purchase he wanted to make. To his shock, his dad agreed and we placed an order that day. His birthday ended with a BSA Court of Honor where his fellow troop members sang “happy birthday” to him and he had birthday cupcakes.

We’ve found that birthday missions make the day more special and by using some as surprises and some that are traditions, the kids look forward to the whole day and not just the presents anymore.

Do you have “birthday missions” with your kids or any other birthday traditions?