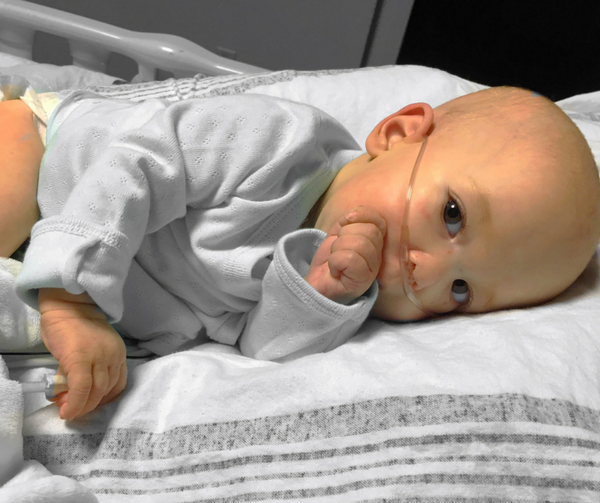 Monica and Ryan Angel are good people. They’re kind, they work hard, they obey the law, they pay taxes… they check all of the boxes of people who deserve only good. Good is what they got when they adopted their beautiful daughter Nina in November of 2014. A little over a year later, on December 22, 2015, another blessing entered their life, their second daughter, Emmi Grace. Life was beautiful. Of course, there was an adjustment period – going from one to two is never easy, and Emmi was a colicky baby. She was happiest in her mother’s arms, as so many babies are.

But in mid April, 2016, Monica suspected something wasn’t right. Emmi seemed more uncomfortable than usual, she was vomiting frequently; she couldn’t keep anything down. Concerned, Monica took her to the pediatrician who noticed immediately that Emmi’s fontanelle, the soft spot on a baby’s head, was no longer soft. He told her to take her three and half month old daughter to the hospital for immediate admission; there was no time to wait for Ryan to arrive.

At St. Joseph’s Children’s Hospital, doctors determined that Emmi was experiencing something called hydrocephalus. Basically, there was fluid around her brain, and it could be happening for a number of reasons. They would need to do surgery in order to drain the fluid and place a shunt. But first, an MRI was ordered to determine the cause. Emmi’s worried parents waited for the news, hoping for the best, but preparing for the worst. It was worse than the worst. 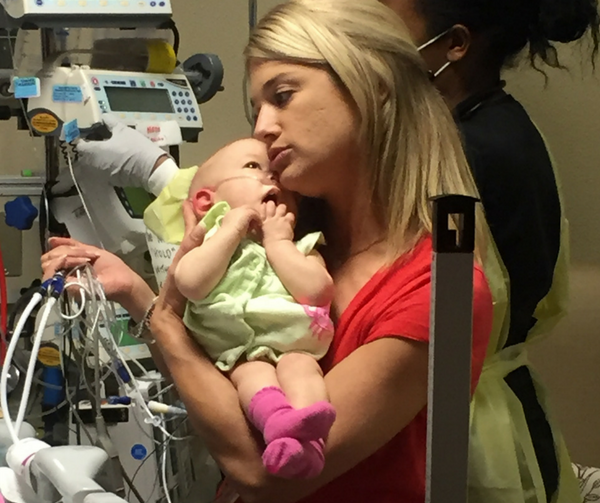 There was a monster inside of their sweet, beautiful, three month old baby… a tumor on her brain stem that needed to be removed immediately. There was no time to weigh options, this was life or death. The skilled surgeons were able to successfully remove the tumor, saving her life, but Emmi’s battle was just beginning. A few days later, Emmi Grace was diagnosed with a rare and aggressive form of brain cancer called Atypical Teratoid Rhabdoid Tumor – ATRT. The prognosis: less than a 1% chance of survival. But Emmi Grace was a fighter, and so were her parents, who decided then and there to do whatever it took to save their daughter’s life. 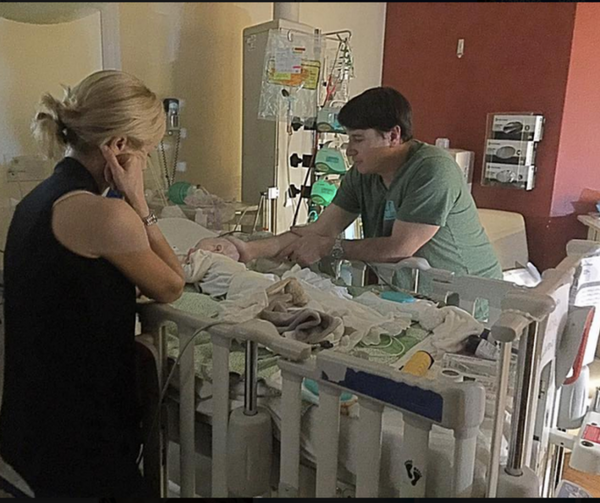 They chose to transfer to Arnold Palmer Children’s Hospital in Orlando. By the time they arrived, Emmi Grace was in distress. The swelling around her brain had returned, and she needed another surgery to drain the fluid. Doctors placed an omaya reservoir allowing doctors to deliver chemotherapy directly to the Emmi’s brain. It was a long shot and it had it’s own risks – after all, the chemotherapy drugs were not intended for children. In fact, none of the four chemo drugs given to her were designed for brain cancer… or for children. No, Emmi’s best chance was a protocol which included chemotherapies designed to treat testicular cancer in 1978, but it was the only chance. For two months, poison was injected into Emmi’s body in an attempt to kill the cancer in her brain.

There were more surgeries, there were intubations, tubes were placed to deliver food and medication directly to her intestine. She lost her ability to regulate her body temperature, she lost her ability to cry. Her parents stayed by her side, day after day, night after night, faithful and hopeful. But by the first week of June, Emmi’s tiny body could no longer tolerate the chemotherapy drugs. She was in immense pain. Her heart, lungs, liver, and kidneys had all been damaged. The chemotherapy was killing her. After prayerful consideration and consultation with Emmi Grace’s dedicated medical team, Monica and Ryan decided to stop treatment and arranged for hospice care to take their daughter home. On June 10, Emmi Grace Angel took her last breath in an ambulance on her way out of the hospital. She was five and half months old.

Monica and Ryan returned home without their baby girl. They would have to face the world without her now, and they had to be strong for their daughter Nina. Monica admits that she understands why some cancer families completely leave cancer behind. They move forward as best they can and never look back – it’s too painful to think about that part of their lives. But she couldn’t unsee what she had seen. She had experienced things she couldn’t un-experience and learned things that she couldn’t unlearn. She knew she had to take action for Emmi Grace.

What happened to Emmi shouldn’t happen to any child, anywhere. But it is especially hard to believe that in our country, with all of the resources and technology we have available, that children are suffering and dying every single day. The statistics are staggering. Each day, 43 children are diagnosed with cancer, joining the nearly 40,000 children already being treated for cancer in the United States. Unfortunately, treatment isn’t always successful.

Immediately, Monica got to work forming Emmi Grace’s Angels. The foundation has three primary goals: to support the families of children suffering from pediatric brain cancer; to support research by raising money to help fund clinical trials; and to raise awareness for pediatric cancers. Monica and Ryan firmly believe that awareness will lead to funding, which will eventually lead to a cure. 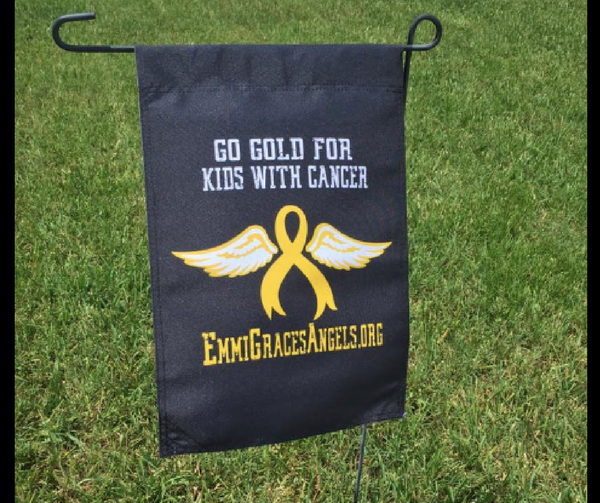 Emmi Grace’s Angels collects money through tax-deductible donations. These donations fund trials that promote cancer research and provide support for local families in the Tampa Bay Area affected by pediatric cancer. They know all too well the issues that families are facing on a day to day basis. On December 22, what would have been Emmi Grace’s second birthday, Monica and Ryan returned to the hospital. Emmi Grace’s Angels presented St. Joseph’s Hospital a check in honor of Emmi Grace’s birthday. They’d found out that there were children with cancer who, while medically cleared for discharge, had to stay in the hospital because their insurance would not cover their medications at home. As a result of their donation, two children were able to spend Christmas at home with their families, instead of in a hospital bed.

The Foundation also provides “Welcome Kits” to families admitted to the hospital with a cancer diagnosis. During the two months that they lived at the hospital, Monica and Ryan learned exactly what a family might need while staying in the hospital– toothbrushes, shampoo and conditioner, socks, etc. The welcome kits also include a card with contact information so that families can reach out for support or to create a “wish list” of items they need delivered. Monica has also been working with local hospitals to make the rooms more family friendly. They are hoping to help place mini-refrigerators in the rooms. A small change that means families will no longer need to leave their sick child to retrieve an item from the nurse’s communal fridge.

Emmi Grace’s Angels has also been able to raise funds for new childhood cancer treatment trials in collaboration with Cannonball Kids Cancer. “The Emmi Grace Applesauce Trial” will test the efficacy of a powdered chemotherapy medication for children. This is a huge advance in the treatment of childhood cancer. Often, either as a result of the cancer itself or the chemotherapy, pediatric cancer patients lose their ability to swallow and use their vocal chords.

Many of the adult chemotherapy options offered are only available in pill form, and crushing the pill changes the chemical makeup of the medication. Children able to swallow the pill suffer from terrible side effects, such as nausea. If approved, this new powdered formula is administered directly into the intestine via a J Tube. This new formula potentially lessens the side effects of the chemotherapy. These trials are essential in the fight to end childhood cancer.

There are very few words, if any, that strike fear in a parent’s heart more than “cancer.” It is every parent’s worst nightmare, but there is hope. Years ago, a group of devoted parents with children in treatment for neuroblastoma decided enough was enough. Together, they formed “The Band of Parents,” an organization that went on to raise more than $6 million dollars and which has greatly improved the treatment of childhood neuroblastoma.

As a result, survival rates have gone up significantly. More funding means better treatment options, and better treatment options mean higher survival rates. In her short life, Emmi Grace touched thousands of people across the country. Through Emmi Grace’s Angels, Monica and Ryan have ensured that her legacy will live on. They will continue to fight until no other child has to go through what Emmi Grace had to go through. Four percent simply isn’t enough. We must do better, our children deserve it. 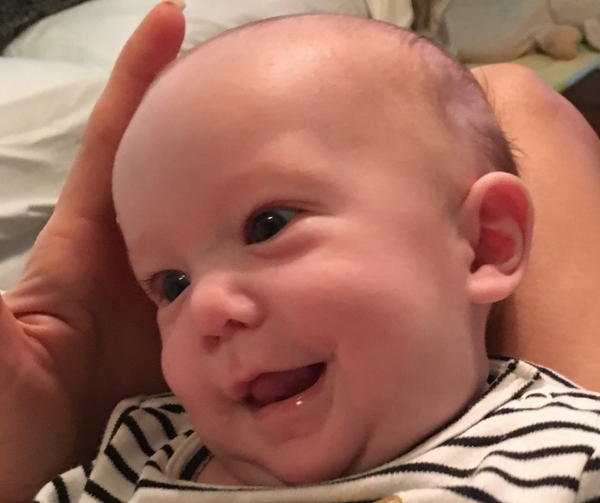 The foundation also accepts items for their Welcome Kits and “wish lists.” For more information on Emmi Grace’s Angels, please visit the foundation’s website at emmigracesangels.org