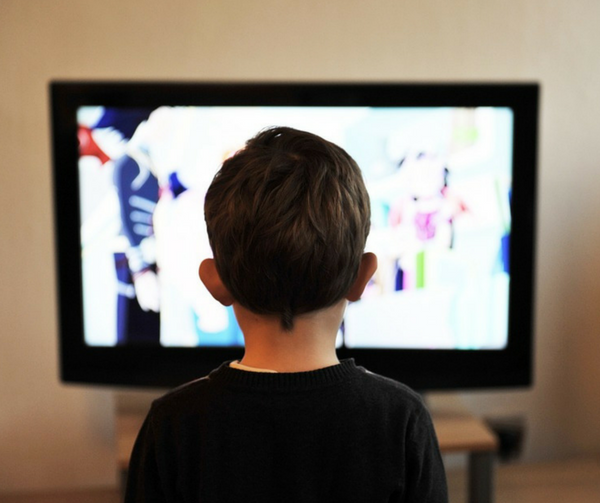 If you’d asked me ten years ago what kind of parent I would be, I wouldn’t have known what to say. I wasn’t one of those people who thought much about having kids… I assumed I would one day, but it didn’t consume my life. My mind definitely didn’t think about what kind of parent I would be – strict, cool, crunchy. So when I had my daughter almost nine years ago, my philosophy was basically “fake it ‘til you make it”. That developed into “do what you gotta do for sanity.”

Sometimes that meant letting her watch Yo Gabba Gabba on the television while I cleaned up the playroom. Other times it was putting her in the bouncy seat outside the shower with an iPad propped up just out of her reach. This was of course so I could rinse the projectile vomit off of my body and hair. I know – no TV before two, they should be technology free, but I did what I had to do and I was OK with that.

This philosophy worked for a while, but it doesn’t anymore. Let me just say, I know this is my fault. I bought my daughter an E-Reader tablet to read books and play educational games. A few road trips later and we had downloaded Netflix for kids. There were rules and parameters but as time went on, my laissez faire attitude began to betray me.

Now we fast forward 8 and a half years and here we are; the day my house entered the dark ages. I was up at dawn with my two-year-old, obviously. Two hours later my daughter still hadn’t come downstairs, which may not seem strange, but I have a LOUD toddler. Around nine, I decided to “wake her” and called her downstairs.

I heard her slow steps reach the top of the stairs. Then as she took her first step, she missed the next step and fell straight on to her bottom before sliding down three or four stairs. My heart dropped, I lunged towards the bottom of the stairs ready to catch her, but she stopped. Tears were already welling up in her eyes when I reached her.  She put her arms around me for comfort… with her tablet still in hand. I could hear the “Liv and Maddie” theme song in my ear.

She missed the step because she was watching a show on her tablet –  the tablet I intended as a reading tool but had since become something that allowed her to watch “approved” shows pretty much whenever she wanted. She brought it down to breakfast, she watched it in her bed after she woke up in the morning, she watched it ALL THE TIME.

So today we entered the dark ages. I took it away. I put away my iPad too. Turned off the television. Well, if I’m being completely honest, what REALLY happened was I screamed at the top of my lungs. I screamed that she could’ve died because she was so focused on her tablet (my fault, I know). Then, I dramatically turned off the television before removing all remotes, cell phones, tablets, etc. from my house. To complete the effort, I locked them in the trunk of my car. Like I said, it was dramatic, but it felt right.

I’d be lying if I said the thought of zero technology didn’t intimidate me. I fed the kids breakfast and we went right outside to play. One hour down, ten to go until bedtime. I was sure the rest of the day would drag on, but it didn’t.  We gave the dog a bath, washed the cars together, made a “bear cave” with my son’s activity table and an old blanket, did puzzles, played hide and seek, returned to the bear cave to decorate it with stickers, and finished up our afternoon playing with the water table and the bubble machine outside.

It as such a good day we decided we’d push it and try to take the kids to dinner, something that always, ALWAYS ends with one of us leaving early with the two-year-old and coming back for the other parent and my daughter. And for the first time in…. ever… we had a pleasant, unrushed, drama-free dinner. So good, in fact, that we went for ice cream after.

Now, I believe in coincidences, but this is not one of them. I am convinced this incredible experience was a direct result of PLAYING with my kids all day with no TV. No background noise, no technology to tempt them, just good, old-fashioned playing.

The kids went to bed without issue and I retrieved the contraband technology from my car, but even as I turned on the television to catch up on my favorite show, I felt a tinge of guilt that I ran back to the television so quickly. But it’s a habit and habits are hard to break… One thing is for sure, I will definitely be limiting our screen time from now on. After almost nine years of being a parent, I think I’m finally starting to figure out the kind of parent I want to be. Go figure.