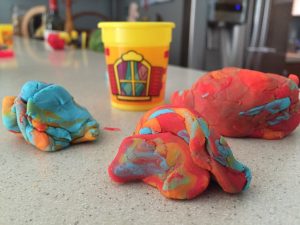 Maybe it’s because I’m a realtor and borderline neat freak, but I never wanted my son to know play dough existed. The thought of it being smushed into the carpet or squished into tiny crevices of my furniture made me cringe.

When Leo started two-year-old preschool, his teachers introduced him to their homemade version of play dough. Just my luck, it quickly became his favorite school activity. But I loved seeing him rush to the play dough table when I dropped him off. “Play dough can be a fun little treat for school time only,” I told myself.

Then one day, Leo went to a birthday party and in the treat bag we discovered Play-Doh. “Oh, I’ll just hide this for now and give it away to someone else’s kid one day. He’ll never find it.” I told myself. But eventually, he found it. So, I started letting him play with it outside on the patio in the springtime. 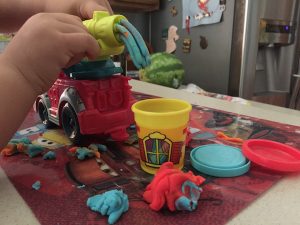 But then summer came, school was out and it quickly got too hot to play outside, and Leo still wanted to play with play dough.

One day, my mom brought some over because she read that it was great for soothing temper tantrums (and we were having plenty of those). As soon as he saw the little yellow containers, Leo’s eyes lit up. I gave in, letting him play with it on a placemat at the kitchen counter.

I still despise the smell, cleaning up the mess it makes and the way the colors mix together and turn it all brown, but I’m slowly warming up to play dough play…under close supervision, of course. Recognizing its benefits for my son is helping me overcome my silly fears. 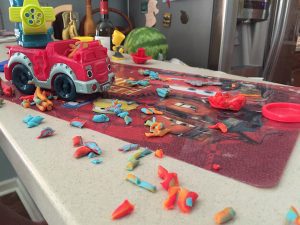 So, I’m sucking it up for the benefit of my son, for now at least. But should it end up in my carpet one day…it may go back to being an occasional treat.

How do you feel about play dough? Do your kids love it?