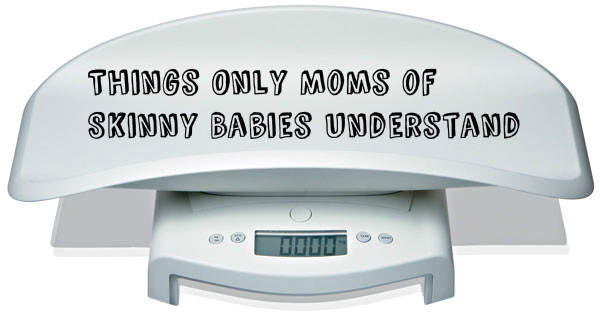 I know this might come as a shock to some, but not all babies have cute, chubby rolls that are just asking to be pinched.

In fact, my 14-month-old son has never had a baby roll. Not one. Not at birth, not at six months, not now, not ever. He’s been a lean, energy machine since the day we brought him home from the hospital.

Despite living in a world of chubby baby-loving memes, I’m a proud mom to a skinny baby. I never thought the size of my child would be such a significant part of my new mom experience, but it has been. And while moms of big babies likely face different challenges, here are some things that my fellow tiny tot moms might understand….

I can’t tell you how often strangers have assumed my son is quite a bit younger than his actual age. When he was 6 months, people guessed that he was 3 months, when he was 9 months, people guessed he was 6 months, and so on. At around 13 months, I remember a pharmacist at a grocery store asking, “So, he’s about 8 months, right?” Yes, my 8-month-old walks, waves, and says “hi,” thanks for asking! (I guess my son must look quite advanced to some!) And of course, I often hear comments like, “What a little guy!” or “He’s so tiny!”

While comments like these are often not intended to be rude and most people are just trying to make friendly conversation, they can certainly make a mom to a skinny baby feel insecure and worry about her child’s weight, especially in those very early months. (I’ve decided there are two things you should never guess  – a pregnant woman’s due date and baby’s age.) I know I would almost always prefer to hear “he’s so cute!” over comments about my child’s (lack of) size.

And then there are the questions about my son’s birth size. “Was he a preemie?” or “He must have been small at birth, right?” (For the record, my son was born full term at a healthy weight.) I personally feel that these questions are not appropriate and might be quite a sensitive subject for some mothers.

Dressing a thin baby can be a challenge. When people told me not to buy too many newborn clothes because my son would grow out of them so quickly…yeah, I wish I hadn’t listened. I’m pretty sure my son wore newborn clothes until he was three months old! Because my son is pretty average in length but below average in weight, baby clothes just don’t fit him properly. I always joke that I’m going to make a “slim fit” baby/toddler line specifically for little ones like mine. (Now don’t go stealing my Shark Tank idea…) A size 12-month length with a 9-month waist would be perfect for my son – and baby belts, where can I get those?

By the way, I’ve personally found that Carter’s and Child of Mine at Walmart make the slimmest fitting clothes for small or skinny babies.

In the early months, a mom who is nursing can feel particularly stressed by a constant comments that her baby is small and/or questions about how much her baby is eating. This may make her question her choice to breastfeed or feel concerned about her milk supply (which is rarely a problem – but if it is, this should be addressed with her doctor or a lactation consultant). Her doctor may even raise an eyebrow and push supplementing, even if it’s not what the mom wants to do. Until I learned to advocate for myself and find a doctor who supported breastfeeding, I was dealing with a pediatrician who wanted me to supplement, in hopes that my son could meet some magical percentile number (which, by the way, he never met – even after starting solids). I was even told by a pediatrician once to “force feed” my child to “bulk him up.” I immediately switched pediatricians, in case you’re wondering. My child took to solids on his own timeline, and he now eats almost anything I put in front of him. I never forced him to eat because I believe in creating a healthy relationship with food.

And even if mom is bottle feeding and knows exactly how much breast milk or formula her baby is consuming, she still may be worried about other health problems due to comments about her child’s size. I often asked myself, “Why is my child is so much thinner than other babies?” “Could he have a digestive issue?” “Do I need to feed him more, even when he’s not hungry?”

The reality is, some babies are JUST SMALL and still PERFECTLY HEALTHY. I know I grew up with the perception that chubby babies = healthy babies. Since having my own skinny babe, I’ve learned that this is certainly not always the case.

Just barely hanging onto to that percentile chart

Oh, I know those percentile charts all too well. As a new mom, it can feel like a percentile chart is like a test in school. 90th percentile MUST mean better, and the lowest percentile must mean you’re failing as a mother. Not true whatsoever! Just like some babies have to be at the top of the chart, others have to be at the bottom. All can be very normal and healthy, so long as a child is growing along his or her curve and meeting milestones. My son has fallen anywhere from the 2nd-10th percentile since birth (on the lower end as he became mobile). Once my doctor realized he was continuing to grow at his own rate each month, she happily said, “He’s healthy – he’s just thin!” Just like adults, babies and toddlers come in all shapes and sizes. Some stay on the lowest percentile as they age, some shoot up over time, some get smaller, taller, or bigger. Also, it’s worth mentioning that genetics can play a large role, as well. A baby with very small parents is unlikely to be the next star linebacker.

As for my “little” guy, he is happily hanging out at the lowest part of the line on that chart – but he doesn’t know that. He’s just a happy, on-the-go toddler who is loving life!

Did you or do you have a skinny baby? What were your experiences?