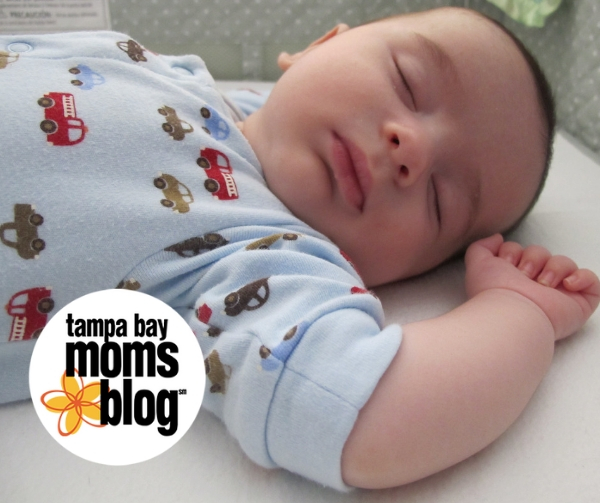 I almost feel guilty saying this: when my son was a baby, I was not a sleep-deprived mom.

My child sleeps like a champion. He always has, even from the first day his dad and I brought him home from the hospital.

You know the picture most of us see when we think of a new mother, struggling through the endless days on nothing but coffee and adrenaline? Yeah, not me. I expected massive sleep deprivation after having a baby. I even feared it. This mama really needs her sleep.

But a funny thing happened when my son came into the world. Turns out, he liked his sleep, too.

Somewhere in the stacks and stacks of parental literature I read lies the axiom that you must feed your newborn in the middle of the night. Tiny tummies need frequent feedings. The science behind the poor sleep-deprived mom.

But it appeared our little bundle of joy didn’t get that memo. He just…slept.

He needs to eat, we thought. Surely we must feed him! And so, for the first few weeks of his life, my husband and I dutifully woke our sleeping baby up in the middle of the night to feed him.

You read that right. Woke. Him. Up.

My father-in-law thought we were crazy. “What are you doing?” he asked in his thick Greek accent. “Waking a sleeping baby? Let him sleep!”

Nope. Gotta feed this baby. It says so right here in all these books. Really, I’m sure it does.

A few weeks later, our pediatrician said the same thing. Let him sleep. He’ll let you know if he needs to eat. He was probably about eight weeks old. And my status as a sleep-deprived mom ended there.

Don’t Hate Me Because I’m Well-Rested

At this time I feel the need to point out that my pregnancy was rough. The morning sickness never went away. I spent a solid nine months of my life either tossing my cookies or on the brink of it. (You don’t want to know about the Cocoa Krispies incident in my car around the six-month mark.) The sickness finally subsided on the day I gave birth to my nine-pound tormentor.

All of which makes me suspect that this awesome little sleeper was my reward for such a miserable pregnancy. He made me sick for the better part of a year, but at least I wasn’t going to be a sleep-deprived mom.

Of course, it wasn’t all restful nights and idyllic days. He was a crier all right. He just saved his wrath for the daytime. The only thing that would quiet him was pushing him in his stroller, so I did lap after lap after lap around the living room, every day until he learned to crawl.

But hey, I always said, I could handle anything this kid threw at me during the day as long as he let me sleep at night.

If He’s Not Sleeping, Something’s Wrong

I finally got a look at the sleep-deprived mom life one very harrowing night when my son was around two years old. We had trouble getting him to sleep. He cried and fought. He’d fall asleep briefly, and wake up crying again. He was slightly speech-delayed so he couldn’t verbalize what was going on at that point. But I knew something had to be really wrong. My little champion sleeper never did this.

Around 10 p.m., we took him to the ER. One look into his ears and the doctor saw the problem right away. The poor little guy had a terrible ear infection. He prescribed drops and told us to give him some children’s Tylenol, and we took our boy home and put him to bed. And he slept the rest of the night.

That experience taught us that if this little guy can’t sleep, we better pay attention. It’s a lesson we come back to again and again as he gets older. Sometimes he’s sick. Sometimes he’s dealing with stress from school. Whatever the cause, we know anything that disrupts his sleep is like the ear infection all over again.

That sleeping baby turns nine in just a few days. He still sleeps most of the night, but now he wants to stay up later and later than his usual bedtime. On weekends, when his dad and I might want to sleep in, he wakes us up at sunrise. I love how he’s so excited to start his day – but I’m starting to approach the sleep-deprived mom status I managed to escape before.

And I know as he moves into his teen years, it will probably get worse. My mom always stayed awake until all of her kids got home safe from our various nighttime activities. One day, not too long from now, that will be me. Waiting and watching for my boy to come home and go to bed. My champion sleeper, and his finally sleep-deprived mom.